A – Z | Freedom of Information | Publications

Menu
Home > About Us > Our Places > Bolsover and North East Derbyshire

Bolsover and North East Derbyshire Place covers the population of the two bordering district council areas in the Northeast of Derbyshire that jointly circle Chesterfield. 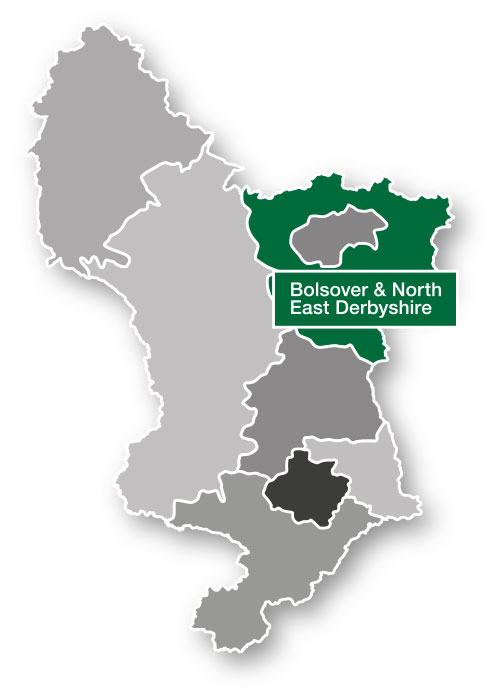 The district of Bolsover is mainly rural and contains four market towns: Clowne, Bolsover, Shirebrook and South Normanton with a population of  around 7800. Northeast Derbyshire district has a population of around 100,000 and the main towns are Dronfield, Killamarsh, Eckington and Clay Cross.  Both districts have an industrial heritage and were major producers of coal. Mining became the main industry in the region for many decades. However, there are now no deep pit mines left in North East Derbyshire.

Bolsover district has some of the most challenging health indicators noted across Derbyshire County. It is the most deprived district and has the lowest life expectancies for males and females in Derbyshire.  North East Derbyshire has some similar pockets of deprivation. Notably Dronfield which borders Sheffield has low levels of deprivation and good health outcomes.

There are four Primary Care Networks within the boundary of the Place Alliance: North Hardwick and Bolsover covering most of Bolsover district and some of Eckington; North East Derbyshire covering Clowne; Eckington; Killamarsh and Barlborough and South Hardwick that covers the southern part of the Place Alliance around Clay Cross. Dronfield is largely included within the Chesterfield PCN.

The priorities of our Place Alliance are around supporting the Ageing Well agenda; delivering a Living Well service for people living with Mental Illness in the area and developing an approach to support more of the population to be more active in their day to day lives. Aiming to increase good health outcomes as a result.

Joined Up Care Derbyshire produces a bi-monthly newsletter which provides important updates on health and care developments around the city and county.